How to Land Knees Against a Puncher. (Video) 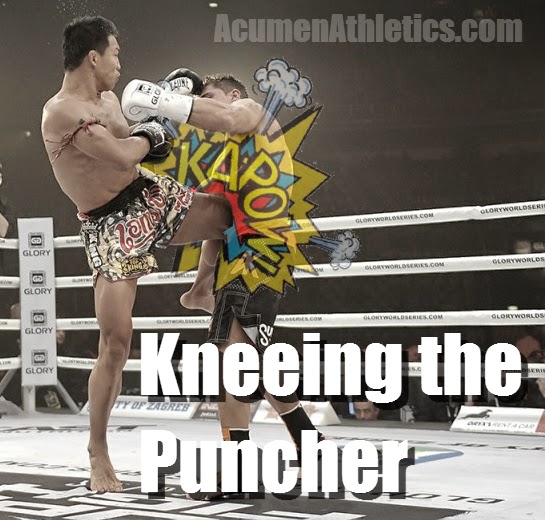 
How can we incorporate Aikpracha's use of long knees in our own training when facing a slugger? Find out how Aikpracha managed to withstand the European slugger's iron hands.

Only the tall?
Most people on the message boards I frequent will argue and agree that long knees are only good if you are the taller fighter. 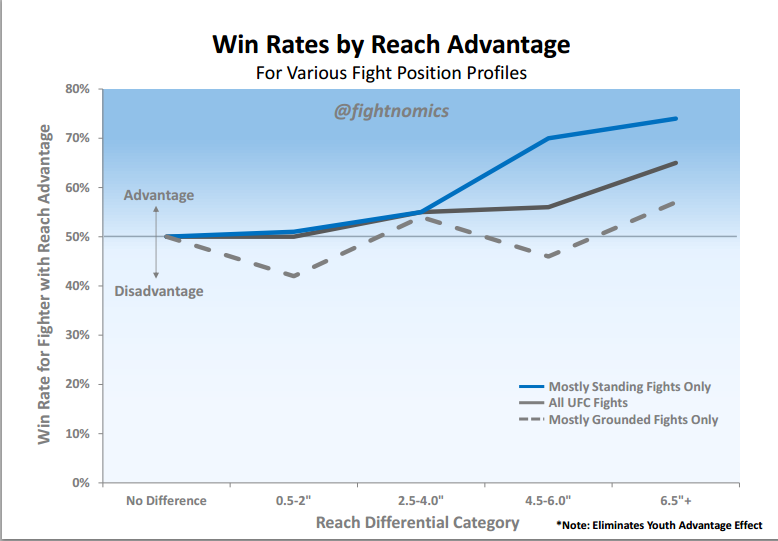 In the book Fightnomics, authors Reed Kuhn and Kelly Crigger analysed that there is an increase in success at the 2.5 in difference but the most significant advantage takes off at the 4 in difference.
Fightnomic's graphs were calculated using UFC stats, not Muay Thai or Kickboxing stats. From my understanding they used all forms of standing striking (punches, kicks, etc...) in order to come up with that calculation. As far as I know, there is no single calculation for long knee strikes landed.

You don't have to be the taller fighter to land a long knee, but you do need a good sense of timing and distance awareness.

Kraus vs Aikpracha
Kickboxing is known for it's fast pace and Thai Nak muays are typically slow starters. Heavy handed Albert Kraus was set to face "the charging bull" Aikpracha MeeNaYoThin. Not much action goes on in the first round, it's more a feeling out process. Along with Meenayothin's slow pace, Kraus plays it pretty reserve in the 1st as well. 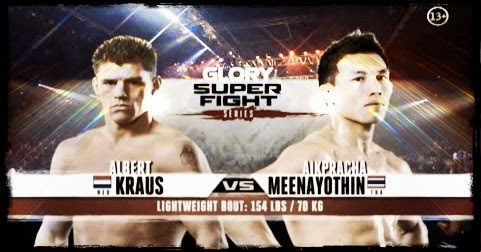 Control The Arms
Controlling the arms and/or hands is probably the best way to cram your opponents punches. Hand fighting is pretty common in Muay Thai, especially when elbows are legal. It's often used to set up elbow attacks, control in the clinch, and prevent an opponent from punching or elbowing in retaliation.


Aikpracha is able to diffuse Kraus' dynamite hands by controlling his arms. He also utilizes bicep control in the clinch in order to prevent a counter and stalls out Kraus until the ref breaks in. 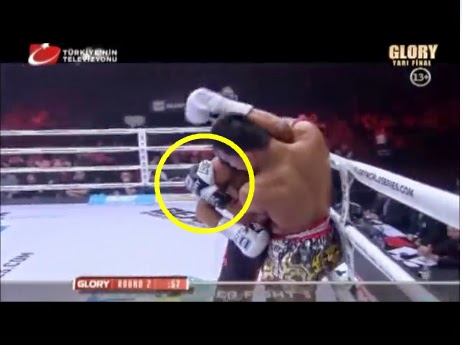 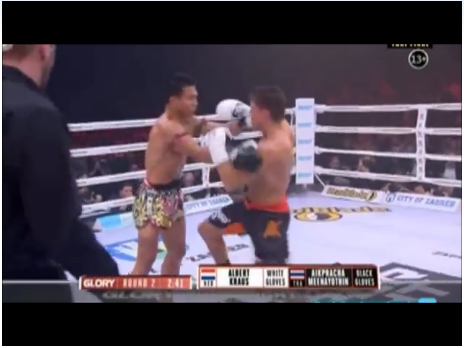 Kneeing the Double Arm Block
One of the most common and basic defensive strategy for any striking combat sport is to keep your hands up. A golden rule for beginners, but it's not as impeccable as most fight fans assume. Having a high guard by keeping your hands leaves your body exposed.
Although taking a knee to the forearm would be better than getting your air knocked out by taking a knee to the body, the extra arm fatigue can slow down and weaken a puncher. What better way to weaken someone's will than to chip away at their favorite weapon?


Buakaw vs Zambidis is a great example of this. Instead of going buck wild with head kicks, jumping knees or the usual tactics taller fighters use against shorter opponents, Buakaw broke Zambidis' will by constantly kicking his arms.

Aikpracha uses Kraus' double arm block against him. He pulls on Kraus' high guard and uses that as leverage to off balance and pull Albert towards the path of the knee. 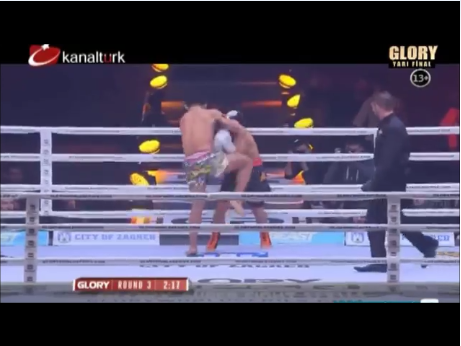 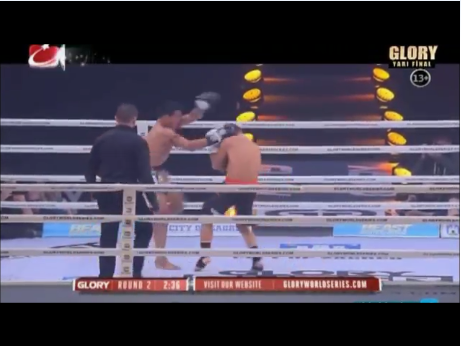 
Kraus puts himself in horrible position while trying to double arm block. He's crunching into the hit hoping to absorb Aikpracha's knees with his forearms.
This folded posture makes it smoother for Aikpracha to land hard knees. The knee travels less to meet the target, which makes it harder to see since it's faster. Also, Aikpracha can easily off balance Kraus since his upper body is leaning forward (weight isn't even underneath his leg). 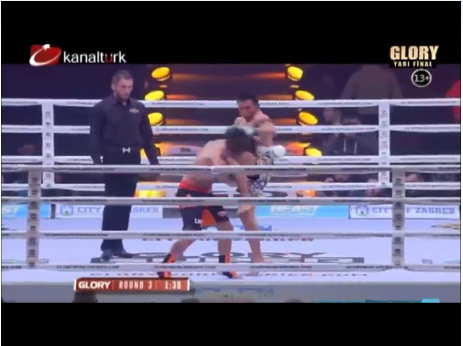 Defending a knee
Kraus picks up on the fact that his body is open and that Aikpracha is pulling his arms. He then uses a cross check + long push to properly defend against a knee.
In this frame Kraus blocks a knee with good posture, checking and long guard to push Aikpracha's upper body. Pushing your opponent's upper body can reduce the power of his/her knee. 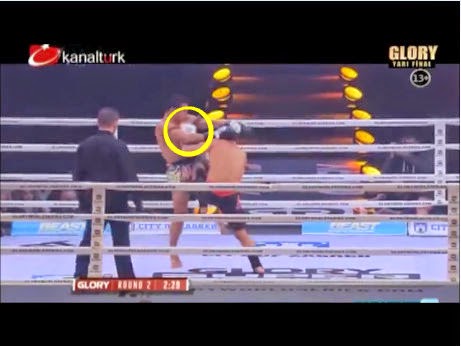 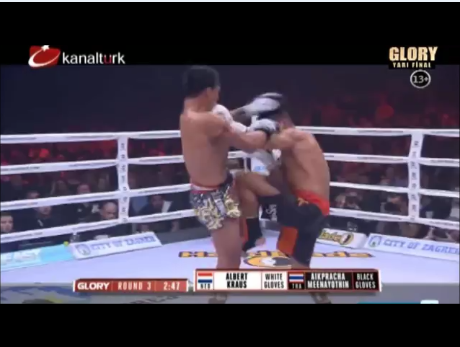 No Hand Trapping
Aikpracha experiments the long knee but without trapping the hand. It's a little to risky against a slugger. Kraus reimburses him with a flush right hook to the face. 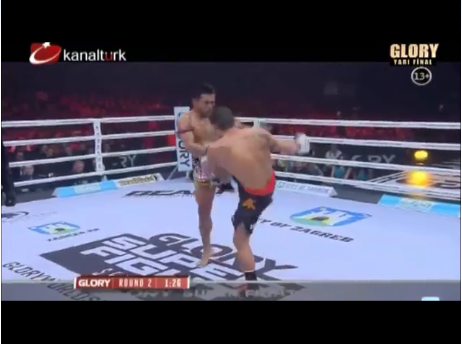 
After getting clocked with a right hook, Aikpracha readjust his game plan and only knees if he's touching Kraus' hand or head. He uses pawing, slight jabs and the long guard to check his distance. Once he calculates his distance he lets the knees go. 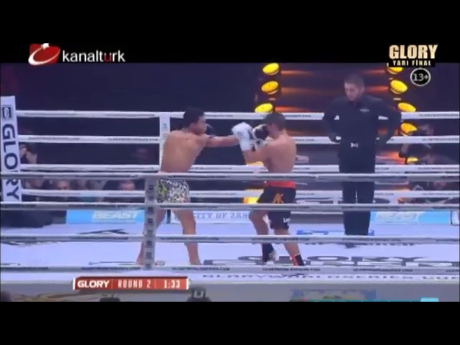 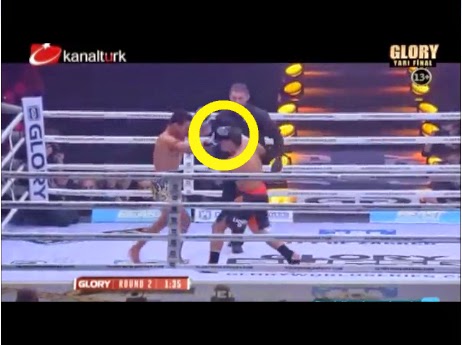 
Positioning is typically ignored by most fight fans. Shifting hooks are another way to set up powerful shots. When you cut to an angle you'll gain a split second advantage as your opponent must turn to face you. This split second can open up new blind spots against your opponent, stutter his/her balance, weaken his/her counter attacks while giving you a power advantage so long as your feet are well planted. 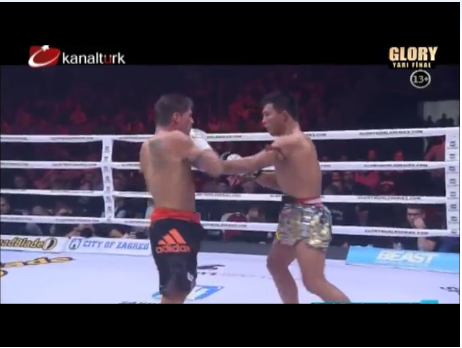 Final thoughts
Aikpracha's performance against Kraus is a great demonstration of how to properly land effective knees against a puncher. Using his tactics such as hand traps, bicep control, pulling the head & sidestepping will keep the puncher's hands tied up and his/her balance staggered.