4 Keys to Fighting A Taller Opponent (Sam-A vs Bangpleenoi) 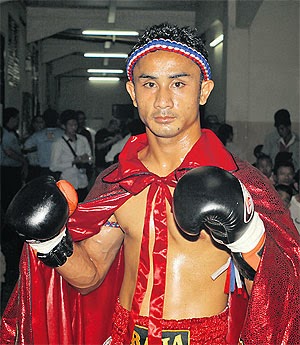 Do you get frustrated when facing taller opponents?
In this post I outline the tactical tools Sam-A used to defeat his taller opponent with a KO finish. I broke it down into 4 principals in which you can include in to your training.


Mixed in with a few pawing jabs, you will notice that Sam-A uses the teep (more about teeps here) to Bangpleenoi's upper thigh/hip area. This serves a few purpose.


Since the shorter fighter is giving up range, it would be wise to lead with teeps and jabs to your opponents nearest target. Whether it's pawing jabs to the hands or teeps to thier leg. It's the most active way to figure out your range.

Sam-A (Red) redirects Bangpleenois's (Blue) feedback kick. This puts Sam-A in an oblique angle, outside of blue's power side, which enables red to land a straight cross and easily twist blue for a sweep. (:52)

Red re-directs again, this time he throws the low kick then cross. Blue ties him for the clinch but red gets inside control, flares his arm up to prevent incoming elbows, and disengages from the clinch. (1:10)

In many occasion Sam-A nullify Bangpleenoi's clinch by quickly aiming for inside collar control and restraining blue's arm (which prevents an opponent from elbowing and assist in turns/sweeps). Red also uses turns and sweeps to make blue's foundation rocky so as to not let blue get set in a dominate position.

As Bangpleenoi tries to regain his balance Sam-A charges him like Winnie The Pooh all over honey. Red finishes blue with an onslaught of knees, a head kick, uppercuts and some more knees.

Final thoughts
The majority of striking sports favors the lengthier fighter. These strategies are from high profile fighters in which you can incorporate into your own training. Here are the principals Sam-A used to deal with Bangpleenoi's reach;


I hope you find these guide lines helpful for your training or next fight. Here is the full fight video from Muay Ties Youtube channel.