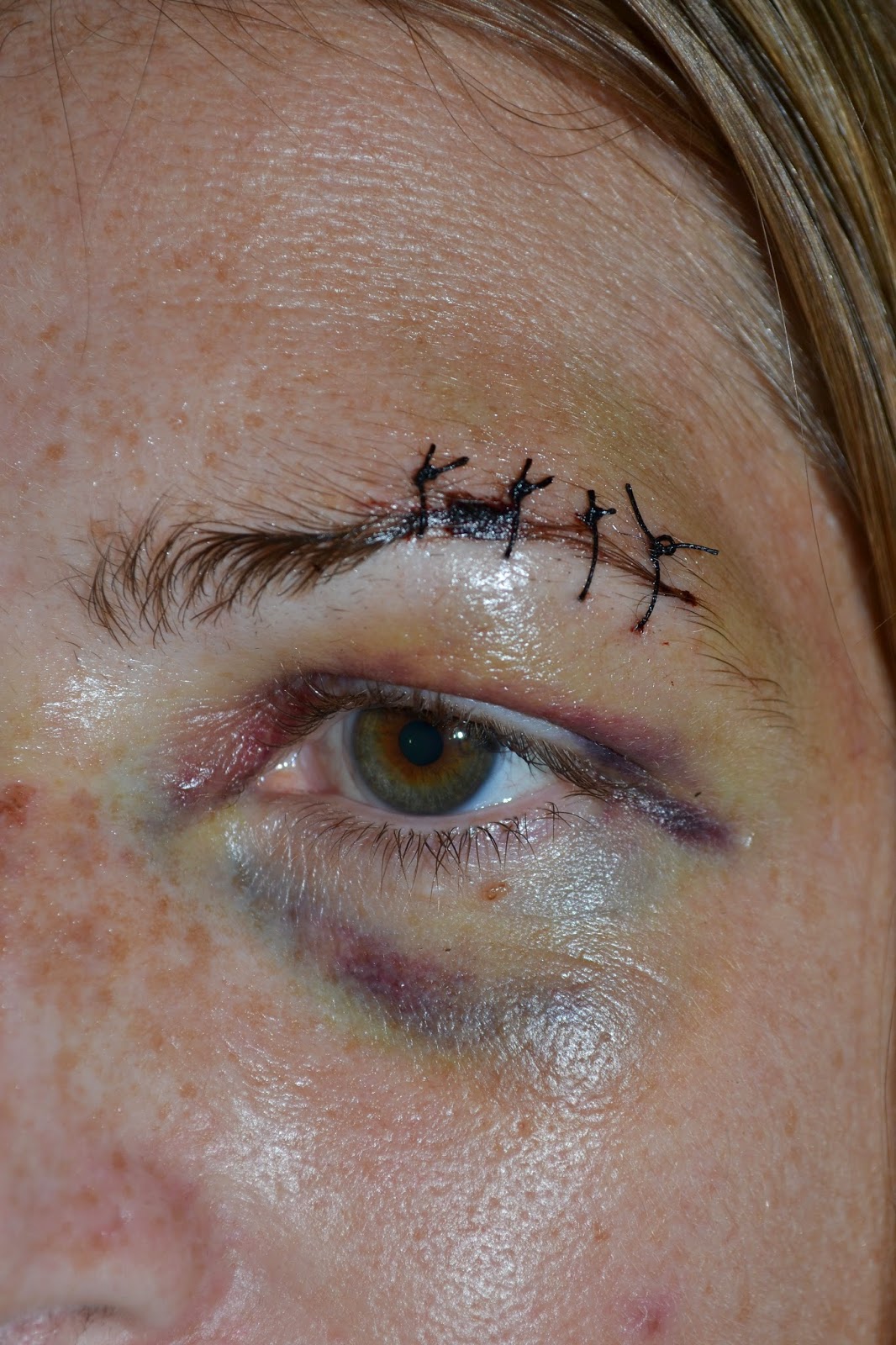 I got cut in my last fight.


Not a big one, just 4 stitches on my left eyebrow. The cut is literally on the eyebrow. A lot of people tell me that I’m lucky because of the location of the cut. This way, the scar won't be quite so noticeable.

Some of my fighter friends tell me I’m lucky because I got cut in a fight and they hope for scars one day too! I don’t think I’m lucky or unlucky. I don’t care very much about getting cut. It is part of life as a Muay Thai fighter and is bound to happen at some point, and usually more than once. It is a fact and one that I have accepted. The Thais are happy to show you their numerous scars from getting cut in fights. I am now officially part of the club. I think the worst part of getting cut is that you are then required to take extra time away from training and subsequently fighting because the cut must properly heal so that it does not cause problems in the future. That is definitely the worst part.


I got cut near the end of the fourth round.
I hit my opponent with a jab and she sort of flailed her hands up into the air and the tip of her elbow caught me on the eyebrow. I felt it, although it did not hurt. In the first millisecond I thought “Oh I’ll make you pay for that” and in the second millisecond I thought “fuck I think I’m cut.” I looked at my opponent and she had a streak of blood across her cheek. I scanned her face for a cut…nothing. Fuck it was my blood. The referee stepped in and I turned to look at my trainer, who was motioning for me to keep fighting. I turned to the big boss and he was making the motion for me to go forward. Danny and Jun were next to him making a similar motion. Last face I saw was Abigail, who had a look of concern but was also making the motion to go ahead. 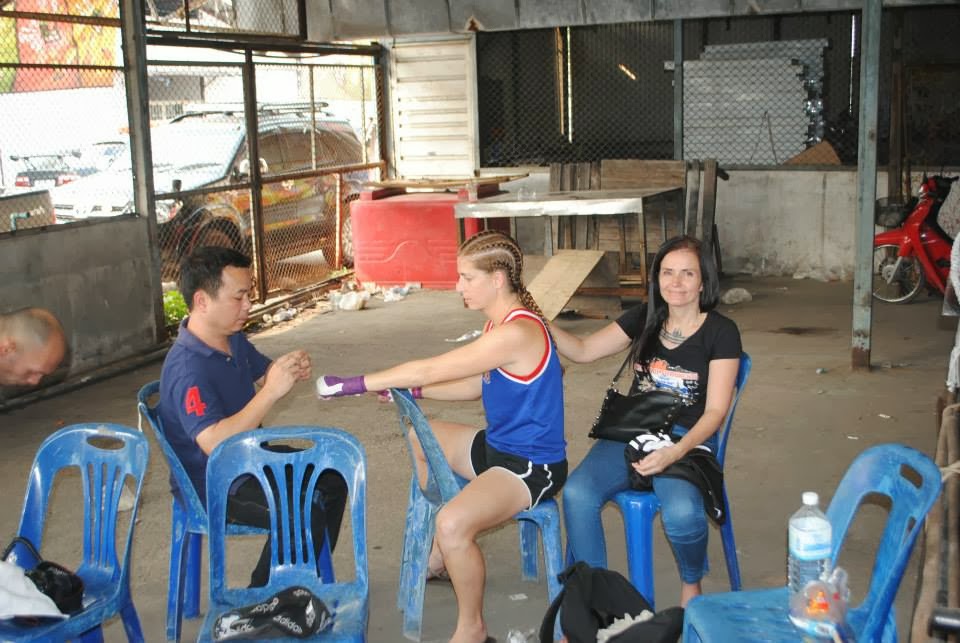 
The doctor came to check the cut.
He asked me if I wanted to continue. In my mind I screamed, “Why are you asking me? Aren’t you the medical professional? I can’t even see myself and have no idea how bad I’m cut!” All I could think of were the numerous cuts I’d seen on other fighter’s faces – those gapping, bloody gashes. Again I looked over at my corner and they were excitedly jumping up and down and waving their hands in the motion to move forward. I thought about a story that had been relayed to me the very day prior, about a guy who got cut in fight. The doctor asked him if he wanted to continue and he sort of hemmed and hawed and the doctor called off the fight. Everyone knew if he had said yes, the fight would have continued. People were saying that he had no heart or a small heart. Oh God that is a fate worse than death when the Thais say that about a fighter. You’d rather they say you have no skill but damn you’ve got heart. I looked at the doctor and said yes, I want to continue. 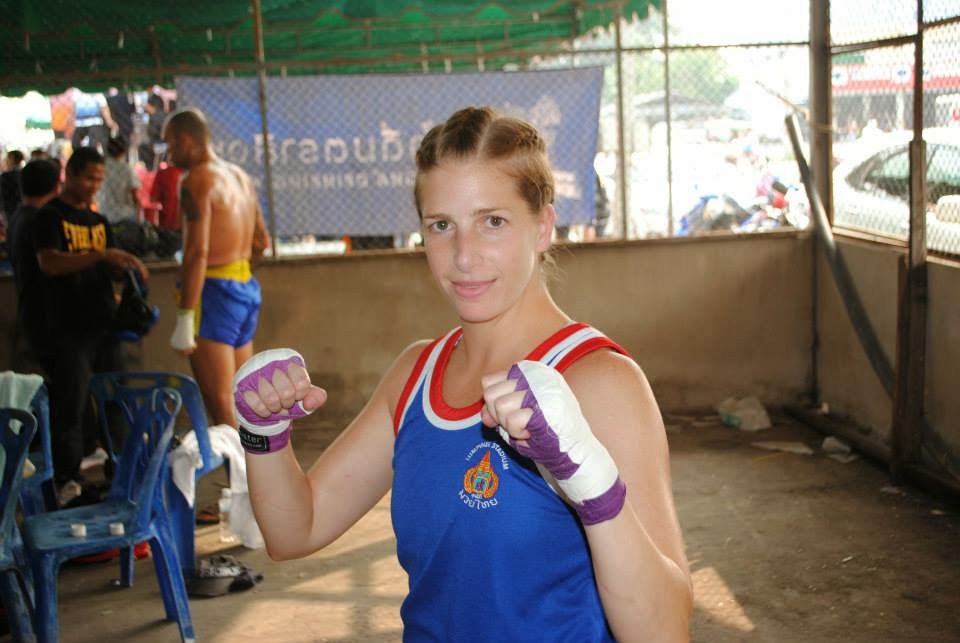 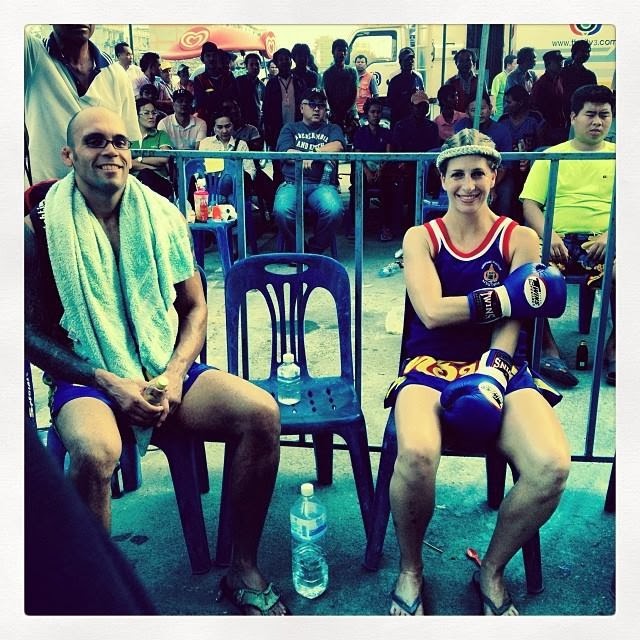 In retrospect,
I was unprepared to deal with getting cut in a fight. There is a lot of mental preparation that goes into fighting; imagining scenarios both good and bad and how you will deal with those scenarios should they arise during a fight (1). Of all of the scenarios I had ever run through in my mind, getting cut was not one of them, which is strange because I have seen so many fighters get cut.

Looking on the bright side,
now I have experienced it so should there be a next time, hopefully I will be better prepared. Going into the fifth round, my boss said my opponent and I were 50/50 in scoring and that I had to keep pushing hard. I think I was slightly more reserved than normal in that last round. I was a bit concerned my opponent was going to go for the cut and try to open it wider. I think she may have been as freaked out as me…or perhaps just tired, because she never made a move to clinch or to try to elbow me. I finished the fight and lost on points. Even with the cut and the loss, I believe this was my best fight to date. I'm all healed up now and me and my scar are back to training. Hope to be back in the ring within the next few weeks.

Maggie Rickman is a nak muay who quit her busy NYC job as a litigation attorney to fight and train full time.